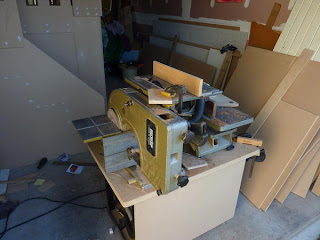 The Emco-Star is a multi-function woodworking machine that was made in Austria in the early 70’s.  I bought mine used at a secondhand tool shop here in Christchurch, New Zealand.  They are beautifully made; most parts are cast aluminium alloy except for the bases which are cast steel.  You literally couldn’t make this machine today - even the bandsaw blade guard is an intricate casting.  Today it would be stamped sheet steel.  Copies of the manual are floating around online, check manuals.es or google.

The main functions of the unit are table saw, band saw, belt sander, and disc sander.  With an optional attachment (sold also as the Emco-Rex) it’s also a jointer and thicknesser.  There are also accessories that you can attach that make it a jig saw, fret saw, wood lathe, mortiser, circular saw sharpener (steel tips only), and drink mixer, though  I may have made that last one up.  The motor has two speeds - 1700 and 3400 rpm.  The various functions on the main machine are engaged or disengaged by mechanical clutches that cleverly disengage themselves if you change the layout of the machine.  The thicknesser/jointer is designed to be unbolted and slid sideways when not in use (it’s engaged through a rubber spider drive) but I leave mine engaged all the time, figuring it adds a bit of flywheel effect.


Some notes on operation.


The table is quite small, almost maddeningly so.  It’s so easy to pull the push guide off the front of the table and have it fall to the ground.  I’ve modified the lower blade guard to attach dust collection as otherwise it soon packs up with dust.  I need to revisit this as my attempt goes out the bottom of the blade guard and sticks out far enough that it is in the way when the machine is set up for bandsaw use.  The over-arm blade guard gets in the way of longer stock and I’m ashamed to say I don’t use it much.  I made a fence the length of the table and added a longer fence to the push-guide. The insert around the blade on mine was cracked when I got it. I've made another out of thin MDF but it's too flexible. As soon as I come across some thin ally plate I'm replacing it.

I struggled a lot to get this to work.  Stock simply would not feed smoothly, and cut chips would get run over by the outfeed roller and imprinted into the workpiece after it had gone through.  I did three things roughly at the same time and now it runs beautifully. 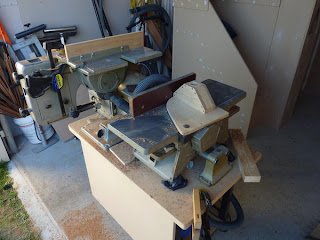 
This also didn’t work well and I had almost given up on it until I decided to change the blades (mine came with a brand new set).  I don’t have the accessory blade setting jig so just used a straightedge off the outfeed table, slowly turning the head by hand (unplug the unit first, for god’s sake) and tapping the blades down gently with a nylon hammer until they didn’t lift the straightedge as they passed.  Now it works great!  Why did I wait so long?


It’s a disc sander.  I attach sandpaper with contact cement.  This needs dust collection too but I haven’t got around to that yet. On the fast motor setting it's real easy to burn softer woods.

This gets turned on by a pull-out clutch made of cast zinc alloy (the table saw must be engaged as well).  Do not under any circumstances try to engage this while the machine is running, it will shatter into a dozen pieces.  I know it was a dumb thing to do and I won’t do it again as making a replacement has been very time-consuming. 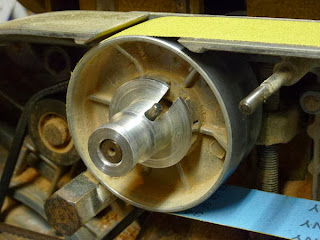 Replacement belt sander clutch made at work.  Thanks work!  Edit: I have since seen another one of these machines that had an intact clutch.  The slot where the roll pin goes through doesn't go all the way to the base.  This keeps the clutch from pulling too far out and fouling the cover, which mine will do.  It gets real hot as it rubs, as the piece of burned skin still stuck to the clutch will attest.  So if you make one for yourself, take this into account. 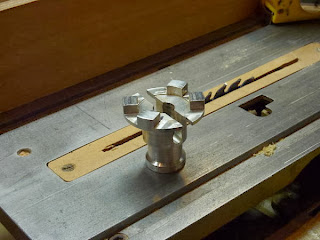 Belts are nearly unobtainable (40mmx810mm) and I expect to have to make my own when I wear out the ones I have.  Check http://www.emcoshop.at as they were offering parts as of mid 2013.
Bandsaw
Mine tracked poorly until I changed the blade.  Now it’s a bit better, but you’re certainly aware that you’re using a compromised tool.  The tiny drive wheels are hard on bandsaw blades (tight radius bends them sharply). Again, check http://www.emcoshop.at or see if a local blade supplier can weld you up one.  Length is 1350mm. You can cut aluminium on the slow setting (carefully!), but don't attempt to cut ferrous metals - the speed is simply too fast.

Wood lathe
I don’t have this attachment but I would guess that it wouldn’t make a stellar tool.  Wood lathes require a wide range of speeds and you’re limited to two with the Emco-Star, though you’d be in the ballpark for items of about 50mm in diameter (slow speed for rough turning, fast for finishing).   If you have the thicknesser/joiner, you'll need to unbolt it and remove it from the table. It's heavy.

Mine came on a stand that was a bit cobbled together. I made a much better stand out of scraps at work. You definitely want lockable casters on the bottom so that you can move it around easily but get it to stay in one place once you start working. You get what you pay for when buying casters, and I didn't get much. The base of my stand is divided into two compartments, one holds accessories and the other houses my shop vacuum. Future plans call for commonly-used tools to be mounted on the outside, probably in short lengths of 30mm plastic pipe. Things like a square, socket wrench with 22mm socket, and a place to hang things like the table saw guide and push stick.

In conclusion, a great tool for those who don't have a lot of space. Individual tools would certainly do each task better but would be far more expensive and take up much more room. If you find yourself tight on space or cash, definitely seek one out. 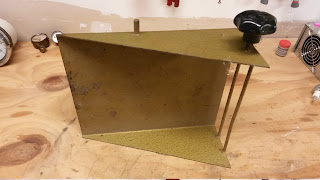 Can anyone tell me what this part is for? It was included in the lot that I bought with the EmcoStar, but I've been unable to figure out what it is. It's definitely an EmcoStar part as it has the exact paint finish of all the other accessories.
Posted by Matt Agnew at 01:32